Showing posts from October, 2012
Show all

No doubt you have seen the youtube clips of the guy running for office in the US of A whose tag line is "the rent's too damn high".  That is the way we feel about the proposed church worship hall aka gym aka community centre proposed for Bell Street. The Chinese Alliance Church has bought two narrow house lots running at right angles to their current Eccles & LeBreton Street property. They propose to demolish the houses and put in a honkin' big box building. They are asking, and no doubt the planning committee will give them, exemptions from all residential and commercial setbacks. In addition to being too damn big, it will have its handicapped entrance on Bell, which is little more than a lane, which means a single para transpo van making a winter pick up or delivery will block the entire street. I remain amazed that the fire marshall has signed off on this mega building, given its negligable side access. The community association previously asked the church to
Post a Comment
By Eric Darwin - October 07, 2012
Read more

DALHOUSIE COMMUNITY ASSOCIATION 755 Somerset Street West, Ottawa, Ontario, K1R 6R1 Eric Darwin VP & chair, transportation committee 5 Oct 2012 Robert Grimwood, P.Eng. City of Ottawa Cc: Diane Holmes, Katherine Hobbs Re: Hickory crossing Thank you for coming to our recent meeting to review the Hickory crossing. We think the right location has been chosen, and will lobby to have the bridge built in the next year. We do have a big problem with the proposed design. The proposed bridge width – same as a MUP plus 1’ additional – would be fine if it was simple structure along the length of a single pathway crossing a culvert or cut. But this is not the case here. The bridge is short, and is at right angles to the east side of the OTrain MUP now under construction. It is at right angles to the proposed path on the west side, due for construction within the next two years. It will also function as a straight-through east-west path connecting two neighborhoods. And i
Post a Comment
By Eric Darwin - October 06, 2012
Read more 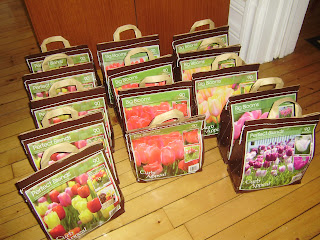 The DCA is fortunate in having good relations with the two Business Improvement Areas (BIA's) in our catchement area. Working with both, we partnered to improve the appearance of our mainstreets in 2013 by planting thousands of tulip bulbs on Somerset Street and Preston Street. The partnership consisted of the BIA's paying for the tulips, and community members planting them. It is not always easy to find suitable spots where large clumps of tulips can be planted, but we were successful this year in getting about 2000 bulbs placed. In the pic below are  some of the  bulbs (90 per bag) for Preston. To keep our good lines of communication open, and for future projects, here is the letter sent by the DCA to the Chinatown BIA. A similar letter went to Preston BIA. DALHOUSIE COMMUNITY ASSOCIATION 755 Somerset Street West, Ottawa, Ontario, K1R 6R1 Eric Darwin, VP 5 Oct 2012 Grace Xuexin Chinatown / Somerset BIA Dear Grace On behalf of the Dalhousie Community
Post a Comment
By Eric Darwin - October 05, 2012
Read more
More posts