Showing posts from June, 2011
Show all

DALHOUSIE COMMUNITY ASSOCIATION 755 Somerset Street West, Ottawa, Ontario, K1R 6R1 Eric Darwin, President To: Councilor Diane Holmes & Councilor Katherine Hobbs; cc: Mayor Jim Watson, Alain Mercier, Diane Deans, Marianne Wilkinson Re: O-Train expansion The Dalhousie Community Association is delighted at the recent decision of Transportation Committee, and subsequently City Council, to expand the O-Train service and increase its frequency of operation. The current proposal is to install a passing track north of Gladstone Avenue. We recognize the economy of installing the track in an area where the cut is already wide enough. However, immediately south of the passing track is the proposed location of the Little Italy station running from a point under Gladstone Avenue south to Young Street. There are good planning and transit operations reasons for constructing the station now. Good planning : Installing a station there now would encourage transit-oriented infill i
1 comment
By Eric Darwin - June 27, 2011
Read more

- Eric Darwin President, Dalhousie Community Association Ironically, the thing keeping the Dalhousie Community Association most busy is the thing that will have the least impact in the short term, but will affect all our lives in the future. I’m talking of the LRT system, of course. Five of the thirteen proposed stations fall in Somerset ward, and the Campus station at the east end of the Corkstown footbridge over the canal will be another important local station. The Transportation Committee of the DCA has had two meetings with the City and their consultants specifically regarding station access. Why do we think this is so important? Well, it’s one thing for the planners to figure out bus routes, station transfers, and entrances and exits, but we are focused on the walk-in –- or bike-in –- accessibility since so many Dalhousie residents live within a short distance of the stations. We check for easy safe street crossings; direct, safe routes; and attractive environments. We wer
Post a Comment
By Eric Darwin - June 26, 2011
Read more

DCA Board meeting, June 1, 2011 Present: Sue Stefko, David Perkins, Don McMaster, Michael Hatfield, Craig Haynes, Eric Darwin, Pamela Connolly, Michael Powell, Laura Bergen, Catherine Boucher, Charles Akben-Marchand, Karol Sjolund, Don Smith, Archie Campbell, Zsofia Orosz Adoption of minutes of May meeting The minutes were adopted with minor changes – moved by Eric, seconded by Mike. Update on LRT Matt Easton from the City provided a short update on the status of the LRT. The conversion of the core to LRT is expected to deal with the present bottleneck (50% cut in busses through downtown, including 2,000 busses off Rideau/Wellington); generate $3.2B in economic outputs. Preliminary design approval is expected in July – there is a slight change as the LRT will be at grade at Campus Station. They are conducting the final phase of the geotechnical and hydrological study. The design-build-maintain (OC-Transpo to operate) RFP will be out in October 2011 for pre-selected applicant
Post a Comment
By Eric Darwin - June 09, 2011
Read more 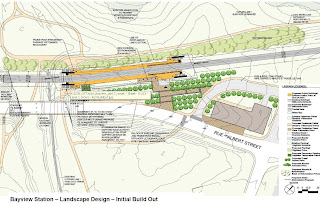 Following up on some meetings with City staff, the transportation committee sent the following note to the meeting participants at the City, on May 27, 2011: Bayview Station access Thank you for taking the time to discuss with us our concerns about the Bayview Station design and access. The conversation was productive and worthwhile. We look forward to continued dialogue and frank exchange of views which will result in a better OLRT and neighborhood. To summarize our views, here are some points that you might find helpful. 1. Station design: the vaulted roof design for the station canopy is attractive. The east end of the station should frame the view of the downtown, including an arc of skyline, as well as the foreground. This dramatic view should be visible right from the top of the escalators from the O-Train platform. It would be good if future LeBreton Flats developments kept this sightline unobstructed.(This view plane might also be of use for the nationally significant b
Post a Comment
By Eric Darwin - June 09, 2011
Read more
More posts