The Dalhousie Community Assoc. met on Wednesday, Jan 5th. In addition to the board, there were a number of residents attending which made the room pleasantly crowded. We are confident this signifies an increased interest in what is going on in our ‘hood.

Between Preston and Bayswater: work in 2011 (which was supposed to be done in 2010) will commence at Preston and work westwards, there will be three weeks of digging for pipes and laterals, should be done by end of May. Curbs, a first layer of asphalt, and then gravel sidewalks should be installed by June. Sidewalk pavers will be installed and final coat of asphalt by November.

The Preston BIA plans to install tree lighting on the O-train to Preston segment of Somerset, which is part of the Preston Street BIA; and on the east side of Plant Pool; and on the NE and SE corners of Somerset, to continue the successful and popular tree-lighting theme throughout the commercial part of Preston. No tree lighting is proposed for the residential area north of Spruce. The first sections of Preston done a few years ago did not get tree lighting as the BIA thought of this after the project started. This will necessitate some trenching, disturbing the existing pavers along Preston, and then adding tree guards with electrical power points. While we regret the digging up of finished sidewalks, the lit up trees are beautiful and worth the disturbance and are much appreciated by the community and visitors. Well done, Preston BIA!

Between Preston and Booth: we expect Somerset reconstruction work to be started and completed late in 2011. Design meetings with the community design team are ongoing. We are pleased to get this work done in 2011 as we anticipate budgetary constraints may result in more parsimonious designs in the future.

Laurier Bike Lane: The City’s segregated bike lane project is now proposed for Laurier Avenue. There is a consensus in the Association that the City needs to keep improving cycling facilities in the ward and the city as a whole, especially the Somerset underpass/OTrain corridor route, and the Strathcona Park bridge over the Rideau River.

Other Cycling Initiatives: the board passed motions to ask the City to add Arlington Avenue to the official cycling plan. This would help complete the downtown cycling network, and reinforce pedestrian demand for a crossing light at Arlington and Bronson. In another motion, the board agreed to ask the City to examine improved use of Percy Street as a parallel cycling route to Bronson, from Laurier to the Glebe. 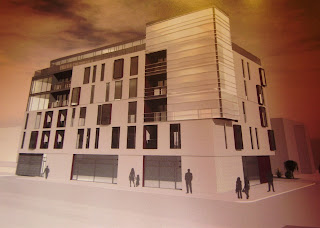 A condo is proposed for the vacant lot at the high profile corner at Booth and Somerset, on the NW side. In general, we welcome the condo and understand the need to maximize the sellable space on this small lot to make it viable. It signals renewal in Chinatown; and we welcome the third major new residential building along Booth. The zoning along Somerset is 5 storeys, they are asking for an extra floor, to be set back ten feet from the front façade of the building to reduce its visibility. Your Association has a number of issues with the zoning and setbacks, which we will discuss further with the City and developer. We are very pleased that once again a developer has chosen to come to us early in the process so that a design can be found that meets community desires. In turn, we try to keep our comments positive and helpful. In general, we liked the proposal but felt the lack of landscaping on the Somerset Street side made the building too stark. Even planters along this frontage would help. A list of more minor objections will also be sent.


Cathedral Hill:
This is a much larger project proposed around Christ Church Cathedral on Sparks/Bronson/Queen. We have received the official rezoning application notification for a condo tower (up to 24 from 17 stories), townhouses (on the north side, on top of the new church hall), underground parking and an office tower (14 storeys, to be built later). Height is a major issue here, as is the lack of affordable units.

An overall vision for this area should be presented by the City and developer, including heritage (the new buildings cut up the block, there will be heritage buildings sandwiched between and diminished by very tall modern towers). There also needs to be some attention paid to streetscaping to enhance the heritage elements and unite the block and as a public benefit for such major upzoning.

Members also expressed major concern about the creep of office buildings to the west of Lyon (current office district boundary),and this being a possible precedent for other church lots. For example, St Peters owns the lot at the corner of Queen/Bay – could mixed uses go in here or would it be more likely they would want only an office building?

Members feel the Church is getting a lot of leeway because they are a community organization and similar plans would not likely be entertained from a private party. We cannot let their religious status be a reason to let poor development proceed without scrutiny.

There were a number of other items discussed at the meeting.  Next meeting 2 Feb 2011 at the Dalhousie Centre, corner of Empress and Somerset at 7.30pm.
By Eric Darwin - January 11, 2011