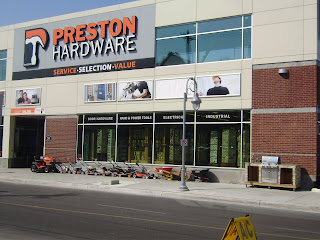 Some time ago I went to a city seminar on vitalizing main streets. Speaker was David Engwicht. He gave us many examples of techniques that work. He cited the case of one Australian small city with a less-than-active main street, suffering from too many vacant storefronts. With business people, local residents, academics, landlords, merchants, they walked the street and identified each store front and envisioned what might succeed in that vacancy. Large posters were then put up in the vacant windows, showing people eating ice cream, buying magazines, looking at travel brochures ... the sort of activities the locals thought might work. It was a great example of crowd sourcing, since within 18 months there were no vacancies left on the street, and to everyone's amazement many of the storefronts were occupied by the businesses portrayed in the posters. Thus was reborn a happy mainstreet.


The Preston Business Improvement Assoc (PBIA) is doing something similar. They have engaged experts to do an analysis of what might work, but now they are turning to the local residents. They have dropped 1000 surveys to households in the neighborhood and have an on-line version too: http://www.prestonstreet.com/survey.php.  They are asking what stores and services we want to see on Preston Street.

There are some pretty obvious choices: a grocery store, Produce Mart, Farm Boy, or similar would be useful. It would be hard to compete with Loblaws in Westboro for those big grocery runs, but a lot of people could do midweek or smaller runs locally. What else?? A magazine store. A greek restaurant with big patio for our endless summer evenings ... a liquor store outlet. A big condo development in the vacant block south of Adobe to inject more customers onto the street. What do you think?

To encourage participation, the BIA is offering some $500 shopping certificates to people who fill out the questionaire.

It's not very often that a BIA turns to crowd-sourcing for retail suggestions, so this is a great opportunity to tell them what you want.
By Eric Darwin - August 31, 2010