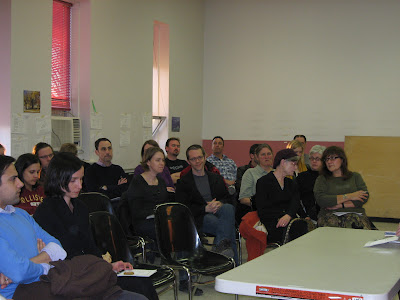 
The Dalhousie Community Association held its annual general meeting on 6 April. We had two guest speakers: John Doran and Rick Morris, of Domicile Developments. Domicile has been busy in the central city neighborhoods for 35 years. They have built townhouses, stacked townhouses, low rise apartments, and some higher-rise apartment buildings. They are active in the condo market these days, but have also built several buildings in partnership with non-profit housing providers. Their reputation amongst community groups and municipal planners is that they are “good guys” who work with the system and neighbours, rather than taking a confrontational approach right out of the gate.

I contacted several building associations and academics trying to find someone to speak to the Association about infill development in our neighbourhoods, but no one was willing to talk about the decisions behind the infill projects, and the numbers involved, until I found Domicile. What are the key factors determining how big, how high, and at what price point, do builders build? Rick Morris, the numbers guy at Domicile, was remarkably open with the fifty or so people that came out to the AGM. He provided us with a breakdown of typical costs for high rise construction, low rise wood-frame apartments, infill townhouses, and stacked townhouses. He even included their profit figures for each type of housing. 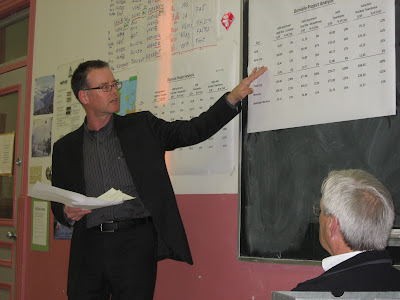 John Doran was an entertaining speaker, full of anecdotes about project issues, run-ins with councilors, dealing with bureaucrats and hostile neighbours. Both John and Rick said the business is very stressful and neither recommends it to their children: there are simply much easier ways to make a living. John did say that small project infill’s of less than 20 units are much more fun and let the owners get their hands in on every step of the process. Listeners were astounded at some of the costs, such as for the model suite(s) which go up on-site and are later torn down in order to construct the real building, or the high costs of insurance during the building process. Rick Morris held up a piece of plumbing with a $700 price tag that was enough to make one reconsider investing in gold or silver and instead invest retirement savings in plumbing supplies!

The point of having well-known and respected builders give a presentation to the community was based on the generally adversarial nature of many infill projects. The adversarial approach is not helped by media coverage which always looks for the “conflict” angle in every proposal. Infill will never be problem free. Many residents resist change to their local environment. And since every project faces unique challenges, and many neighbours bring differing wish lists and objections, not everyone will ever be happy. But knowing that the people that run development companies are (sometimes) people just like us makes it easier to dialogue.

The President’s report is usually a tour of the major issues facing the neighborhood over the last year and what is coming up. But with the monthly Dalhousie Reports available on-line both from The Buzz and at this web site, this year’s report dealt a bit more subjectively with the issues.


The neighborhood has been getting a lot more media coverage. We are not-so-often called “centretown west”, nor is Dalhousie heard with a “wherez-dat?” Dalhousie is on the map again. This is also helped but what I call the “CBC index”: we can now find CBC personalities on many blocks in the neighborhood, because it is (still) affordable and close to the downtown.

The DOTT LRT transit project has been a bit quieter of late, as detailed planning continues with the city and consultants. And yes, that should worry us. Because what we are learning is that our neighborhood will get drastically downsized station facilities, no bike paths, and minimal walk-in facilities. Our access to the NCC lands along the Ottawa River will also be cut back if we let it happen.

We are all proud of the Preston streetscape, with its wider sidewalks, friendly lighting, and hundreds of trees and shrubs. I think the rest of the city has sat up and taken notice of how well it turned out. We took many of the lessons of Preston and applied them to the reconstruction of Somerset Street. Construction is resuming now on the O-Train to Preston section. Then the Somerset reconstruction continues up the hill to Booth street, and the new Chinatown look will be implemented. Also in Chinatown, the Gateway Arch, a royal arch has put Chinatown back on the map. The traditional grocery shops are struggling or dead, and too many restaurants are fighting for the lowest-priced buck. But the street will revive, and the coming of some new condo projects, such as the 37 unit one proposed for the corner of Booth and Somerset, will help.

Not everything we worked on came out fabulously. We did beat back the proposals to widen Bronson, and won a grudging study of the “road diet” concept. But it is hard to work towards a better street when the response from the City consultants is negative every day in every way. That street reconstruction is now delayed for a year or more, which gives us more time to Rescue Bronson. But at the same time, the Carling study came out with recommendations for widening that road, mostly to serve the peak rush hour commuter to Point Gatineau. We are still fighting that one; why does the City want to sacrifice existing neighbourhoods to benefit commuters to suburban projects in another province? And this year the City starts examining Albert Street between Bronson and City Centre Avenue, with an eye to widening it. I predict we will have a hard fight ahead of us to make it a more walkable and bikable street that looks good.

We also remain unhappy with the Bayview-Carling CDP process. This planning process is going so slowly we wonder if the real agenda is to make sure that plan comes out only after all the developable lots have been rezoned on a spot basis.

We had a generous number of volunteers from the community join our board at the AGM. And there is plenty to keep people busy. In addition to reacting to road and development proposals, we are trying to find some creative infill projects of affordable housing. We have to remain vigilant to push problem properties to clean up and to prevent the proliferation of non-permitted ugly parking lots, to get appropriate redevelopment of obsolete properties, and to keep our schools open so the area is attractive to families.

As a result of an ongoing lobbying campaign, we got the bike underpass under Somerset Street near the O-train, which had been deleted from the 2011-12 budget, back into the budget and it will be constructed this year. Now we have to get the Ottawa River-to-Carling Avenue pathway itself into next year’s budget. We welcome the assistance of anyone and everyone in the neighborhood to work together to build a better Dalhousie.
By Eric Darwin - April 12, 2011