Holiday Greetings to all our loyal readers. The next meeting of the DCA  will be an abreviated meeting  on Wedn. Dec 8th at 6pm. Please let me know if you are interested in coming as there will be a location change for this meeting only: EricDarwin1@gmail.com.

By knowing what is going on in your neighborhood, you are better placed to influence change. We welcome your comments.


The biggest issue in the past month as been the Rescue Bronson project, a coordinated effort with Centretown Community Association, and with CCOC (who are downtown landlords with lots of community spirit).

Rescue Bronson: Readers will recall the City's plan first revealed in the Spring of 2010 was to widen Bronson at the expense of narrower sidewalks, later revised to some widening but still four lanes.

Bronson today demonstrates the inadequacies of 1950’s road planning, for both motorists and the neighborhood suffer the effects daily. We want something better, and the best time to do better is when the road is being reconstructed. Unfortunately the planners were not imaginative, and it has been a struggle to educate them and the general public.

The public meeting in November was an astounding success, with a turn out over one hundred and fifty people from all walks of life. This is the biggest centretown meeting in many years. The Rescue Bronson group presented three wishes:

More details are available at http://www.rescuebronson.ca/.

Buoyed by the level of public interest and excitement that we can do better, the key stakeholder group met the consultants to review progress to date. The consultants came forth with two redesigns for the Albert-Bronson intersection mess, one of which we encouraged them to pursue further. The proposed design is consistent with the Escarpment District neighborhood plan  and the City's Official Plan. To implement the new design will take considerable planning, public consultation, and direction from Council. Warning: this is a concept design only, and it will take lots of work and public consultation to refine it and get it implemented. If you want to influence it, volunteer with RescueBronson! 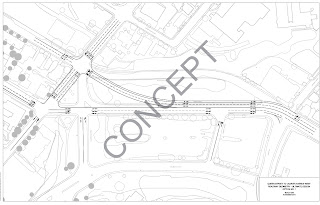 While not enthusiastically embracing the road diet concept for the middle section of Bronson (Laurier to Gladstone), the city planners did find that it was not impossible, and would not result in traffic chaos. Members of the group are meeting with the planners to come up with a road plan that will satisfy more than just the rush hour commuters.

The south portion of the street, from Gladstone to the Queensway remains to be improved, we have ideas for the planners but have not had a chance to review them in detail, and we want to pursue cycling improvements too, which may involve a parallel route along Percy but this will also require lots of work.

Recently we learned that the City is now unlikely to proceed with road reconstruction in 2011-13, as originally planned. If the project remains delayed, it gives us the opportunity to work out the bugs, to get a better public right of way for everybody. We will continue to meet with city planners and expect to ask for an expanded planning directive from council in the New Year. If Bronson is worth rebuilding, it is worth doing it well.

From Stimulus to Austerity: The economic crisis of the past few years was partially addressed by governments borrowing from the future to spend more today. The stimulus funding was aimed at “shovel-ready” projects.

The funding for the projects was based on three levels of government cooperating, so the City had to find increased monies for its share of the stimulus spending. Many of the projects constructed were advanced from the City’s list of future planned projects.

As the stimulus funding winds down, the projects will be completed in 2011. The City, like other levels of government, finds itself with a bare cupboard and the need to adjust back to pre-stimulus levels of building. We are, in short, leaving the stimulus era and entering a more austere period.

The Dalhousie Community Association has been consulted on neighborhood priorities for infrastructure for the next budget period. We identified our number one priority as being the continued reconstruction of Somerset between the OTrain and Booth Street. Our second priority is the pedestrian & cyclist underpass under Somerset for the OTrain multipurpose path. It seems awfully shortsighted to rebuild Somerset without putting in the underpass, and then coming back in a few years to dig up the road again. Our third priority is to ensure we get improved pedestrian and cyclist facilities and improved landscaping if Carling is reconstructed from Champagne to Bronson.

We encouraged the City to make its budget cuts to Bronson Avenue, postponing the reconstruction for a few years so that more intelligent planning can be done before the concrete flows.

Speaking of Somerset, we are greatly encouraged by the progress in designing the new Somerset between Booth and the OTrain. The colours and patterns of sidewalk pavers have been chosen, as have benches, planters, lighting, trees, and protected parking bays that ensure merchants have parking available 24/7/365.

Some of the designs will be totally unique and exciting, taking advantage of new technology for improved street environments. We are also working with the City on public artwork selection, as 1% of the reconstruction budget will be spent on art. There will be public meetings coming up to solicit more input into what you want to see your neighborhood look like in the future.

We have also been meeting with the City planners on the Laurier segregated bike route project. Laurier Avenue from the canal to Bronson has been selected by the City as the preferred location for the project. There are many challenges remaining to be addressed. We are particularly concerned that the western end of the route, between Bay and Bronson, is inadequate. Traffic turns at Metcalfe are another issue.

If the project is to go ahead, and succeed, it has to be done well, or else the whole idea of improved cycling facilities in our neighborhood and elsewhere in the city may be set back.

Your community association also does a lot of little things from month to month. These things usually don’t make headlines, but they do help keep our neighborhoods vibrant. We review Committee of Adjustment applications, talk to property developers and businesses, and watch for creeping blight and inappropriate land uses. Sometimes these are public issues, often they are confidential. We feel the earlier and more often we talk to these other players in our neighborhood, the better the proposals for change will be.

Our January meeting will be on the 5th, at the Dalhousie Community Centre, ground floor, corner of Empress and Somerset, at 7.30pm. Feel free to come by, we don't bite.

- Eric Darwin is President of the DCA and writes on neighborhood issues at http://www.westsideaction.wordpress.com/.
By Eric Darwin - December 07, 2010