The October meeting of the Dalhousie Community Association was jam-packed with sixteen agenda items. This follows the hyper-busy September meeting … which indicates just how many things are happening in the western half of Somerset Ward. But your Association is not really complaining … that busy agenda means we are having lots of input into what is going on in our neighborhood!

The first item up was the little neglected parkette on Norman Street, off the south end of Preston. It comes complete with a little stage, but with uncertain pedigree. Is it really an official city park at all? The board decided to inventory all public greenspaces in the neighborhood and then request confirmation from the councilor’s office and city staff as to which are city parks. Then we can establish a providence and maintenance and renewal plan. The mostly-paved park in front of St Anthony church will be rebuilt in the next year or two (plans have been approved), but Norman Street parkette is not the only orphan. What is the status of the walking trail along the O-Train corridor, which is to be upgraded with a new multipurpose paved path starting next year? Or of the little park at the top of Primrose stairs? This knowledge base will also help in lobbying for the city purchase of the Dominican Gardens on Empress for public parkland. 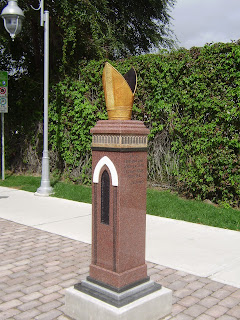 Postcards from the Piazza sculptures on Preston Street: through a complicated series of circumstances, there are potentially two additional columns available for carving and installation. The board decided to add our voice to the chorus asking for these to finished and installed somewhere along Preston. The first fifteen sculptures have been really well received by residents, business, and shoppers along the street. The Preston BIA has produced a brochure that helps tell the stories behind each piece; it is available free from many merchants along the street.

73 Aberdeen was a rezoning application to convert a house on a side street into a two storey art gallery, art school, and apartment. The applicant now needs Committee of Adjustment approval to redo the front façade. Having lost our arguments on the rezoning, we decided not to follow up the CoA application as the neighbors want to at least get a decent front on the building.

On Preston there is a hookah pipe lounge that apparently has been subject to a number of noise complaints, especially in the middle of the night. We discovered there has been considerable amount of enforcement activity at the property by By-law services, Ottawa Public Health, City Police, and Federal Tax Inspectors. We also learned that by-law enforcement officers go home at 2am, after that calls must be made to the police at 613.230.6211. It is important to document problem addresses so that corrective action can be taken and good terms be maintained among neighbors. The DCA will work with the Councilor’s office; incidents should be reported immediately to 3-1-1 to establish a “paper trail” that will eventually lead to action. The city process is “complaint driven” – if you grumble to yourself, nothing will happen!

Rescue Bronson! project: We are examining options, including a motion at transportation committee to keep pushing the objections so Bronson doesn’t get buried in asphalt for another half century. The current street configuration is awful for businesses, residents, and through traffic. The city has agreed to examine “road diet” options for the street. These alternative lane configurations can smooth traffic flow and make the road safer for residents and pedestrians while not reducing the volume of traffic the street can handle. However, we remain uncertain how seriously the traffic engineers will study the alternatives. Are they just going through the motions before brushing us off? A web site and flyer to alert residents to the possible outcomes are in the works. The next public meeting on the street is tentatively scheduled for November 18th.

The DCA and Centretown Citizens Community Association are jointly sponsoring an all-candidates meeting October 19th at City Hall. We are putting together some tough questions for the candidates, and hope to see a good turnout at the event. Thus far, the race in Somerset ward has not been exciting, despite the many things happening here. 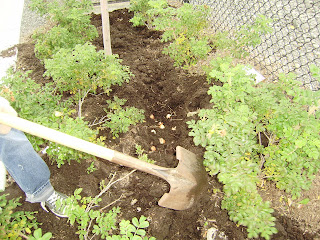 Springtime bulbs: the Preston BIA gave us funds to buy 400 bulbs to plant on Preston between Spruce and Carling. A team of garden aficionados had fun on Thanksgiving weekend planting the mix of red tulips and yellow daffodils. The Chinatown BIA gave us funds to buy 150 bulbs to replenish the gardens along Somerset Street; and Councilor Holmes gave us 125 daffodils to supplement some private donations of bulbs for the Albert-Spruce section of Preston. The DCA cannot plant bulbs everywhere in the neighborhood [maybe someone should try to see just how far we could go...] , but these are our two traditional main streets and we try to do our bit to keep them attractive and loved spaces. We also hope that these beds encourage other home owners and businesses to plant more bulbs next year (or at least give us the money and we will do it!). Well-tended gardens and landscaping add to a cared-for neighborhood, less trash, and more pride.

Prostitution is back on the agenda following a controversial court decision that is now being appealed. Obviously, province wide or at least city wide regulations will be required. In the meantime, it is important to curtail curb-side prostitution by reporting any instances witnessed. We will get involved when and if the trade is to be regulated and “zoned” for in our bylaws. 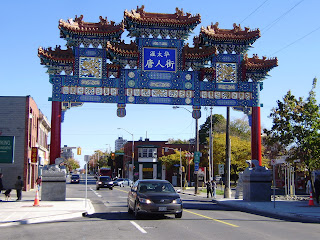 The Chinatown Arch has been in the news big time, and deservedly so. The arch is beautiful, big, and provides a dramatic heart to Chinatown. All the residents and businesses involved deserve congratulations on getting the $1.5million dollar gateway constructed in just six months (following years of lobbying, fund raising, and planning, of course). When we compare the arch project to other municipal projects on which large sums get spent for much less visible results … The Chinatown BIA will soon have free brochures in Somerset businesses. The brochures will explain the features of the arch, the symbolism, and offer culture-bridging tips. The DCA is sorry to see Grace Xuexin, head of the BIA for the last two years, move on to persue other career interests. Fortunately she will be staying on for some time in a consulting basis to deal with the street reconstruction, sidewalk, ped lighting, and new artwork installations.

Hickory Street ped bridge/Section 37/ high-rise condos: the Association made an appearance at Planning and Environment Committee when it was dealing with the application for 16 and 20 storey condo towers at 125 Hickory Street. We asked that the application be legally tied to the developer contributing funding to a pedestrian-cyclist bridge over the O-Train at Hickory Street. This bridge has been on the planning boards for years, and will deliver a number of neat benefits to the community. The PEC agreed to make the application conditional on the developer agreeing to contribute to the bridge, and city staff was directed to strike deals with Domicile and other builders nearby. They did not accept our recommendation that the bridge must be provided before the first units are occupied. Instead, the city will collect the money and we have to hope and pressure them to provide the bridge in a timely manner.

This method of getting a contribution from a developer for neighborhood improvements is called Section 37, based on the rule number in the Act. In this case, the developers like the idea of the bridge, and are eager to contribute. Does this “compensate” or reward the community for the additional height in the rezoning? Will developers learn to expect they can buy additional height by tossing sums into a “community chest”? Could it be abused as an extortion tool whereby neighbours or community groups demand benefits from every project? Will the city bend its principles and neighborhood plans in return for cash? Is this tantamount to a tax on new residents? The consequences of section 37 are not as obviously good as they first might appear. This discussion will continue into the future.
By Eric Darwin - October 15, 2010