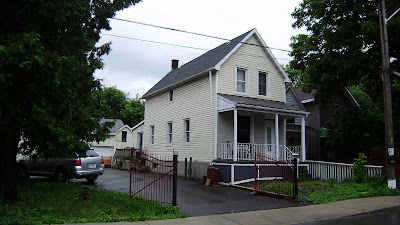 property owner wants to sever driveway into a separate 26'wide lot on which he would construct two townhouses, back to back, with a apartment bridging over top of both lower units
Letter sent from Dalhousie Community Association
To: Committee of Adjustment
File # D08-02-09/A00130 & 131

1. it is possible for the applicant to build in conformance with the zoning, on the new vacant lot, and

2. it does not comply with the official plan sec 2.5.1 (Compatibility and Community Design) and the Urban Design Guidelines for Low-Medium Density Infill Housing, and

3. the building proposed is not a minor variance, and

4. the proposed building is of a size that is not appropriate to the street, lacks amenity space, has too much impermeable surface, dwarfs the neighboring structures with bulk and shadow, and lacks snow storage.

The DCA is familiar with the City’s guidelines for Low-Medium Density Infill Housing and would support an application that meets more of the guidelines. We are not opposed to severing the lot, per se, but are opposed to the building the applicant wishes to build.

In the following paragraphs we will note a number of fundamental grounds where the application is non-compliant with Sec 2.5.1 of the Official Plan and the Urban Design Guidelines in fact and in spirit.

The applicant proposes two surface parking spaces for three apartments. There is no parking provision for additional vehicles or visitors. The proposed units are large, two and three bedroom units which may well need to have more parking, particularly if the units are shared. The applicant-owner-occupant of the original dwelling unit at 128 Pamilla will have only one parking space but already owns at least two vehicles. He assures the neighbours he intends to continue residing there. The short dead-end street has no turning circle at its stub end and is already congested with parking. There is a popular restaurant-pub located a few doors east of the property at the corner of Preston (Pub Italia) which places commercial demands for on-street parking.

The street consists primarily of modest homes with a floor size of approx. 600 sq ft or smaller. Most are two storey. The infill proposed is two, two-bedroom townhouses on two floors with a fully finished basement “office” with ensuite, plus a two bedroom apartment spanning the tops of the two townhouse units. It fills up every buildable foot of the lot and every foot of the height limit. It is significantly larger in appearance and volume than the existing homes.

Pattern of the Surrounding Community

It will dominate the streetscape and all the backyards on the block. Most existing houses are two storeys with steeply sloped roofs. The infill proposed will appear to be a flat-roofed box, as the low slope of the roof will not be visible from the street. The building extends its large mass and height well back of the adjacent houses, which tend to get lower and narrower towards the back. It looms over all the backyards of the existing houses and those of the street behind. The main entrance to the back-yard facing townhouse faces the rear yard, not the street. The entrance to the third storey unit is via an open staircase midway along the 9’ driveway. The proponent even labels the side of the building as the ‘front’ and the street-facing façade as the ‘side’ of the building.

The existing homes have usable green space backyards and service areas. The presence of fences, low garages and outbuildings, trees and shrubs renders the yards reasonably private. The proposed infill does not respect the privacy of the adjacent residences, and virtually 100% of the lot that is not built up is paved over. The infill does nothing to minimize shadowing on adjacent properties, but rather looms over them with lengthy three storey walls.

The proposed infill does not achieve a good fit into an existing neighborhood, nor does it honour its character, architectural and landscape heritage of simple homes. It shows no civic-minded spirit. The new lot is fully built upon or paved, there are no trees or sideyard or backyard landscaping at all. Much of the new building does not face the street, so it does nothing to animate or improve the streetscape.

The City’s Urban Design guideline 3.1.7 requires that infill avoid having units that face the rear of another unit, unless there is rich detail and extensive landscaping. The back townhouse in this infill simply faces two unlandscaped parking spaces, and is accessed in the farthest corner of the building with a simple uncelebrated entrance that is more like a back-yard door than a principle entrance.

Design guideline 3.1.9 requires rear elevations and rear yards in line with their context, to be consistent with the pattern of neighbors. The large bulk of the proposed building extends well back of adjacent units, and is a major cause of upset for the neighbors. And, in violation of sec 3.1.10, does not respect the privacy nor amenities (such as light) of the yards to the east or south of the infill. Unlike sec. 3.2.2 which calls for gradated heights and setbacks, the proposed infill is a large square shoebox structure that looms over the street.

The Dalhousie Community Association has seen many quality infill projects in our neighbourhood over the last thirty years. We strongly believe the proponent can do much better. The current proposal only maximizes the potential building revenue while violating numerous official City urban guidelines for low and medium density infill housing. The DCA and neighbours are willing to offer positive suggestions to the proponent for the redevelopment of the lots in question in a manner that should be profitable to the proponent and beneficial to the community.

We also note with interest that the proponent has acquired other lots in the area and plans other infill projects. This application will serve as a precedent or template for his developments in the neighbourhood. We want developments that are good neighbours and good business too.

Update: the Committee of Adjustment turned down the application.
The applicant is appealing the decision to the OMB.
He has made several modifications to the plan: the third floor is pulled back about 4feet from the rest of the facade, the rear balcony removed, and the whole building set about 2' lower into the ground.